King's Quest I - Quest for the Crown 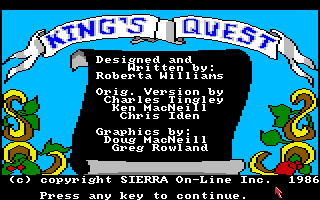 King's Quest I - Quest for the Crown

Sir Graham is a brave knight who is sent on a quest to retrieve three treasures that were stolen by deception and stealth: a shield that protects its bearer from invaders, a mirror that foretells the future, and a treasure chest that is forever filled with gold. If Graham takes these treasures back to the royal castle, then the ailing King Edward the Benevolent of Daventry will hand over the crown. During his travels, Graham will meet characters that will either help or hinder him.

King's Quest is commonly considered the progenitor of third-person-perspective adventure games. As opposed to earlier graphic adventures, the player is able to navigate the protagonist on screen in eight directions, creating an effect of three-dimensional exploration. The player character can also be obscured from view when hiding behind an object, is subjected to gravity, and has different animations for actions such as picking up an item, falling, swimming, etc. Graham can be moved around with arrow keys and perform various actions when the player types commands, normally consisting of noun and verb combinations (e.g. "Take flower", "Talk man", etc.).

The game world consists of a cyclic outdoor area with places of interest (houses, characters, etc.) that must be found through exploration. Much of the kingdom is accessible to Graham from the beginning, and there are only a few restrictions imposed on traveling. In order to complete the game, the player has to procure certain items and use them in correct situations or with specific characters. Some of the puzzles rely on fairy tales, and a good knowledge of those makes them easier to solve.

The game awards the player points for most of the actions he makes Graham perform. Since some of those are not crucial to completion, it is quite possible to finish the game without having attained the full score. Some of the tasks in the game have multiple solutions, though the game may grant the player less points if he chooses the simpler one. Many hazards await Graham on his journey, and death is frequent if the player is not careful. The game can also be rendered unwinnable by failing to collect a specific item or wasting it.